within the terminal is an area of rapidly increasing importance because the yard space to stock the growing number of containers has become a critical resource. Usually containers are placed one above the other in stacks. Picking one of the underneath container requires additional moves (rehandles) necessary to clear the containers on its top. To maximize the throughput of the system, these unproductive moves should be avoided.

Terminalstar finds an optimal location for each incoming container. Only boxes with the same length can be stacked, and the maximal stack height depends on the type of equipment employed. It is good practice to place containers with similar attributes one on top of the other. In this way, each container in a stack can be considered equivalent, avoiding rehandles. One of the most used stacking strategies involves placing export containers with the same departing ship and same destination on top of each other. Alternatively, it is possible to stack according to the estimated time of departure so that containers with an earlier departure time will be placed on top of others that will be picked up later.

In automated storage blocks, automatic re-stacking during times where the handling equipment would otherwise be idle, can be used to re-optimise the storage area resulting in a reduction of one-tenth of handling operations during loading. 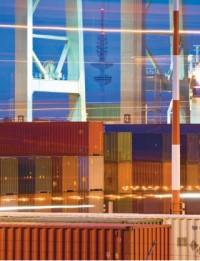